Las Palmas de Gran Canaria is the most cosmopolitan city of the Canaries and one of the cities with the best weather in the world thanks to its exceptional location, next to the Tropic of Cancer, and to the trade winds that come from the northern Atlantic. The result is an average temperature of 17ºC in winter and a 25ºC in summer.

Its privileged geographical location also makes it the European capital of the Mid-Atlantic as well as a cultural and economic link between Europe, Africa and America. It is the capital of the island of Gran Canaria, and shares with Santa Cruz de Tenerife the capital of the Autonomous Community of Canary Islands.

Las Palmas de Gran Canaria is noted for the beauty of its seacoast, and boasts Las Canteras Beach, one of the most recognised urban beaches in Europe due to its exceptional weather conditions and its singularity. The indigo colour of the sea in Las Palmas de Gran Canaria invites to have a break and to wind down, but also to practise any kind of water sports and activities all year round.

Five beaches, a stunning seafront avenue, and an internationally acclaimed regatta sailing course attest the marine character of this city that is part of the World Surf Cities Network.

Las Palmas de Gran Canaria shows its richest identity through its port, the Port of La Luz and Las Palmas, which has shaped its character and its relevance due to the steady flow of people, goods, and services. It is a true sign of mixture and coexistence, of a welcoming and cosmopolitan city.

It is the second entrance to the city. It is connected with 180 ports worldwide through 30 shipping lines. This is a reference port in tourism cruises with around 800.000 visitors every year.

City of history and heritage

Las Palmas de Gran Canaria show through the historic neighbourhoods of Triana and Vegueta the historic traces of the footsteps of kings, explorers and distinguished visitors. Its buildings have witnessed the birth of famous Palmense characters such as Benito Pérez Galdós and Alfredo Kraus.

Stroll around the colonial-style streets of Vegueta is like travelling to the past of a city with more than five centuries of history, a city that has been the passage of historical characters like Christopher Columbus, a city that has suffered the greed of pirates from foreign lands due to its strategic location.

Las Palmas de Gran Canaria is the home of many international festivals like the Classical Music of the Canaries in winter; the Intenational Film Festival or the Opera Festival, having the latter being celebrated for more than 50 years. Many cultural and arts events are also held throughout the year, placing the city as a referent in the Canaries. Among them, you can enjoy the Carnival, the Jazz Festival, and the TEMUDAS Fest that is held in summer.

A wide network of museums, exhibitions halls, theatres and concert halls permit a fixed programme throughout the year for all tastes.

Las Palmas de Gran Canaria is the economic heart of the Canaries due to its status of mandatory crossroads between three continents. Its intense commercial activity makes it the shopping centre of the archipelago. Merchants from distant countries such as India of the Far East, who have chosen this city to develop their commercial activity, cohabitate with traditional commerce and modern shopping centres. Open air commercial streets, department stores that combine the renowned brands with leisure, markets, and flea markets, propose the best products to meet any demand, from the most selected boutiques to regular shops with local products. It’s a whole shopping-city.

Las Palmas de Gran Canaria gather one of the most diverse catering offers of Spain, from traditional eateries to the new betting of young talented chefs. There is a mixture of flavours from every continent in this city; like in no other place of the archipelago, new textures are tasted and traditional cuisine is enjoyed. San Cristobal, Vegueta, Triana, Port-Canteras area, Tafira…all these districts host places to test our palates. There is almost everything for everyone. The wines produced on the surrounding areas of the city are a clear example of the island’s quality wine. 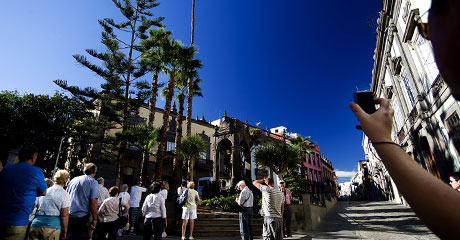 The Atlantic warmth of the Palmense people is universally recognised for their cheerful character and hospitality. Las Palmas de Gran Canaria was the cradle of tourism development in the Canaries. The city has currently adapted itself to meet the demands of today’s tourism by creating a growing leisure, congress, cultural and sports oriented tourism. Many of these facilities gather in the vicinity of Las Canteras Beach, the marina and the historic districts of Vegueta and Triana, which is an incentive for those who come to work or enjoy the city, and who complement their agenda with a walk or a swim in the sea, at any time of the year.