Las Palmas de Gran Canaria is the most Cosmopolitan city of the Canaries, and one of the cities with the beast climate in the world thanks to its location, next to the Tropic of Cancer, and also thanks to the trade winds coming from northwest Atlantic. The result is an average temperature of 17ºC in winter and 25ºC in summer.

Its wonderful geographical location makes it also the European Capital of Mid-Atlantic and a cultural and financial bridge between Europe, Africa and America. It is the capital city of the island, Gran Canaria, and shares the status of the capital of the Canary Islands with Santa Cruz de Tenerife.

The city is located on the northeast of Gran Canaria, at only 18 kilometres (20 minute- drive) from the International Airport of Gran Canaria, making it easy to reach by plane in only two and a half ours from Madrid, four hours from the main European cities, and only at a six-hour flight from the American continent. 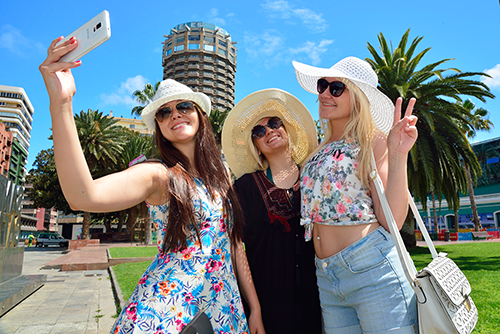 In 1996 specialised magazine Wheaterwise published a wide global report involving 600 cities that highlight as tourist destination. The study placed the city of Las Palmas de Gran Canaria as the one with the best weather in the world, according to a research endorsed by the Syracuse University (NY), written by Thomas Whitmore, and published as 'Pleasant Weather Ratings'. The average yearly temperature of 22ºC makes it a real privileged location.

On one hand, the city offers a pleasant climate in winter, perfect for this destination in that time of the year. During summer, on the other hand, its beaches and streets can be enjoyed and visited with a much more comfortable temperature than the very high ones that exist in other tourist areas of the island. 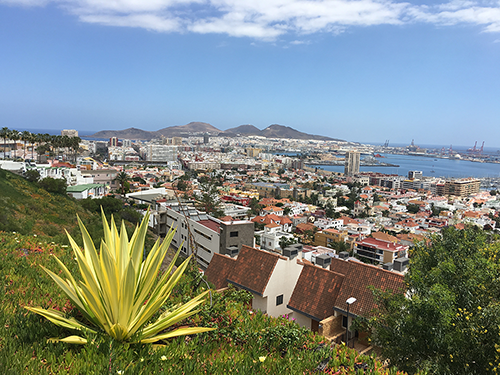 Las Canteras Beach is one of the best city beaches in the world: a unique jewel right in the city, making it easy for the visitor to relax on the golden sand, practising sport by the shore, and also learn or enjoy surfing, scuba diving, snorkelling, kayaking, etc.

Sport clubs and schools in the area help these activities. Your bucket list must include a walk along the promenade: a local tradition since many citizens of Las Palmas de Gran Canaria enjoy a walk specially on the early hours of the morning or at the afternoon to enjoy the impressive sunsets that can be also enjoyed from any spot of the three- kilometre promenade that makes a light curve, as it the sky was a stage, from the Alfredo Kraus Concert Hall, the Plaza de la Música, the surf area of La Cícer, the popular Playa Grande, and La Puntilla, entrance to the Borough of La Isleta.

Beyond that point, the tourist can keep walking along the Avenue of Los Nidillos towards the natural place of El Confital, well known by every surfer, and also by those who look for silence and calmness; it is an open place that gives its back to the city, a perfect location to enjoy the sunset.

These experiences can also be enjoyed all along the beach promenade on any of the numerous bars and restaurants where to enjoy a meal al fresco, making this beach the natural theme park of Las Palmas de Gran Canaria, an environment with a vivid city life. 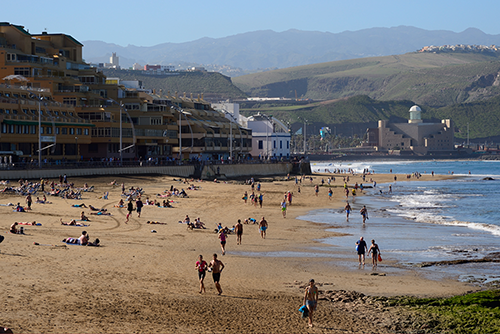 The city of Columbus

Before his first trip, the one of the Discovery, Christopher Columbus stopped in Las Palmas de Gran Canaria to repair one of his vessels, La Pinta, a necessary layover to cross the Atlantic. The city, only a small settlement in those days, founded in 1478, began to grow around a few houses which later became the historic borough of Vegueta and the Guiniguada ravine.

Nowadays, the old town offers a unique sight on this side of the ocean: an area of Columbus-style architecture where Plaza Santa Ana square highlights along with the Cathedral and the Town Hall (the old city hall where the City Council plenary sessions still take place). 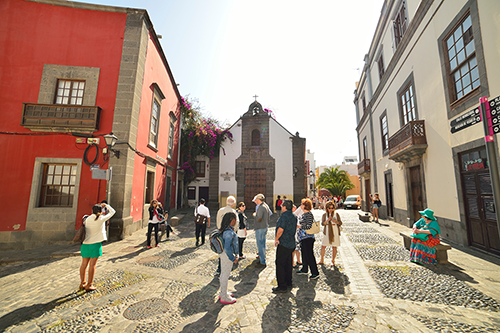 The Borough of La Isleta, on the north-eastern side of Las Canteras Beach, was the cradle from which the modern carnival in Las Palmas de Gran Canaria began its way to what it is today. During the dictatorship of General Franco the carnival was prohibited; however, it survived under the euphemism of Winter Festivities and people celebrated the masque-balls inside many popular social clubs in the area.

Since the eighties, the Carnival of Las Palmas de Gran Canaria gained more and more strength, highlighting when some additional events began to take place with an impressive response from the public at Parque Santa Catalina, the main stage of the celebrations. Nowadays, the Day Carnival in Vegueta, an extense programme of events for children complete a festivity that presents the Queen Gala and the famous Drag Queen Gala as their key dates, along with the popular murgas and comparsas contests.

Every winter, many tourists come to the city to enjoy these festivities that always displays a great celebration on the streets. Parades and concerts are always followed by thousands of people in disguise. Carnival is, without any doubt, one of the greatest events in Las Palmas de Gran Canaria every year, not only known by locals but from people from all over the world. 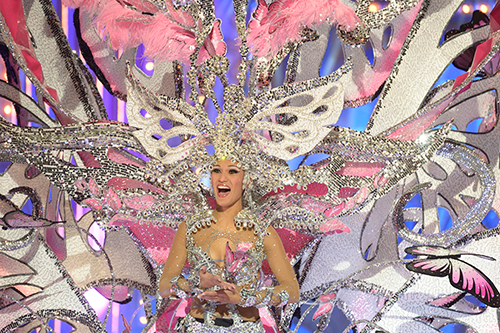 In this 21 st Century, Las Palmas de Gran Canaria has turned into a destination with a rich gastronomy offer. A wide menu that includes local typical food (the essential papas arrugadas – wrinkled potatoes-, Canary pork ham, seafood, Canary cheese…), but also the contemporary revisit of these dishes under a contemporary perspective.

Besides, the city highlights for its great offer of many restaurants of different gastronomy definitions, delicatessens that suit all tastes, something very positive when you travel with your family. All along Las Canteras Beach promenade and through the neighbouring streets, many restaurants offer international cuisine from many different specialities of the world.

The historic boroughs of Triana and Vegueta, presenting a wide arrange of restaurants of any kind, the fishing village of San Cristóbal (where seafood cuisine is mastered on its restaurants), and a special place like the City Marina complete the varied and rich gastronomy offer in town, almost a must enjoy for the visitor. Las Palmas de Gran Canaria is a place to enjoy good food… and to accompany such tasting with an exquisite list of Canary wines. 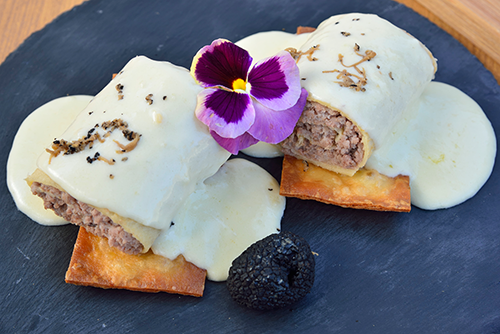