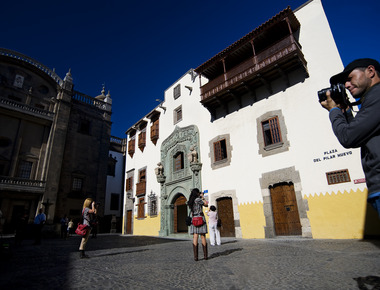 Casa de Colón (Columbus House) is erected on the placement of the former house of the Island’s Governor, only representative of the Kingdom of Castile in the Canaries in 1492.

In that time, fourteen years after the foundation of the city in 1978, Christopher Columbus makes his first stop in Gran Canaria, where he also stopped in his second and fourth trips.

The museum has magnificent patios and exhibition halls to revive Columbus’ travels, his stays on the islands, the relationships of the archipelago with America, the history of Las Palmas de Gran Canaria, pre-Columbian America and to admire its outstanding art collection.

The current building, of traditional Canary architecture, was refurbished by the Cabildo de Gran Canaria in 1951, retaining original features and reconstructing others.