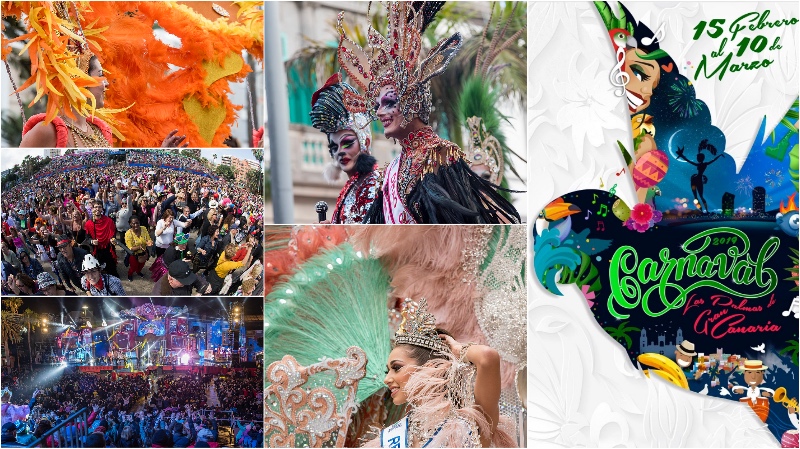 Carnival is a tradition that could be called fundamental for the citizens of Las Palmas de Gran Canaria. This fiesta was able to resist the years of dictatorship in Spain, disguised under the name of “Winter Fiestas”; it was celebrated virtually in hiding in the social clubs and the streets of a neighbourhood of the likes of La Isleta: a working-class urban community built as a result of the expansion of Puerto de La Luz and of Las Palmas, where the humour, the masks and the jollity of the carnival party-goers were always appreciated and enjoyed.

Although the first celebrations of masked balls point to the historic city centre, its historic Gabinete Literario - Literary Forum Building - and the Italian influence which originated from Venice (and which travellers coming to the Grand Canary capital brought with them), it was in Isleta where today's Carnival was born, a carnival which has evolved from the furtive gatherings of "masked revellers" to a Fiesta of National Tourist Interest (it was given this status by the Spanish Ministry of Tourism in March 2017). In addition to this, the Society for the Promotion of Las Palmas de Gran Canaria, the Carnival organiser, is at work to achieve Fiesta of International Tourist Interest status. How has such an evolution been possible? 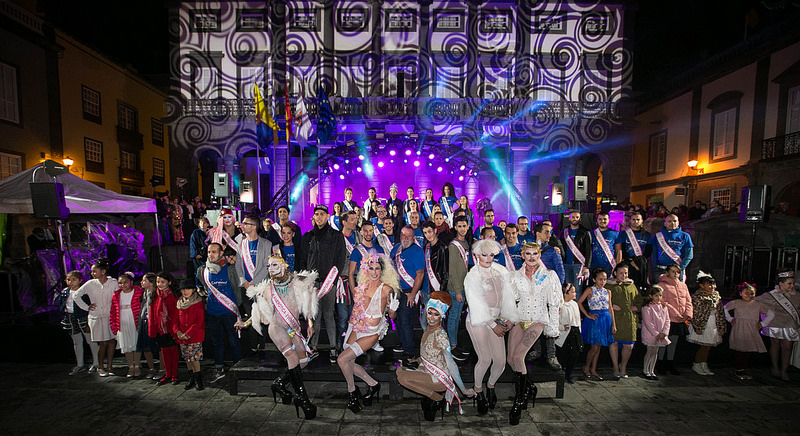 The secret is out in the streets, in the open, tolerant and cosmopolitan spirit of the city itself, which has grown to the point of becoming the main urban Canary Island destination around its port. Docks which haven't stopped growing since the end of the 18th century, to act as a logistics centre between Europe, Africa and the Americas. And also to become a supplies point for vessels on those routes, bringing together a great international fishing fleet in the 1970s and 1980s (Soviet and Asian fishing vessels included) and to function as a merchandise transfer centre, as well as becoming, in the last decade, a hub for naval repairs for latest generation vessels. 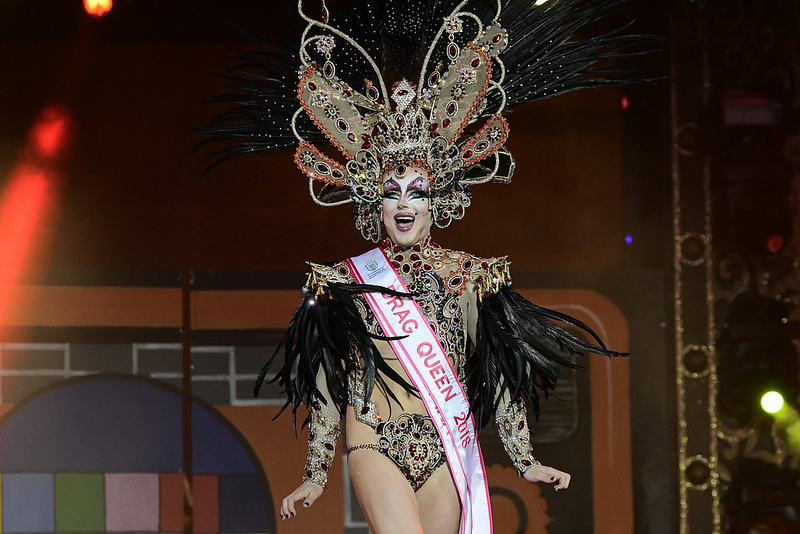 The Gran Canaria capital is long used to receiving visitors of different nationalities, who have even decided to settle and to form their own communities in the city: from the Indian sub-continent, from Korea, from Africa... Very close to the Port, La Isleta was the first urban area to develop the feature of being the open, cheerful host. It is not surprising that it should have been from there, once the democratic era had started in Spain, that a Carnival should arise, albeit still in its early days as far as its programme was concerned; it was the beginning of the parades of the sumptuous dresses of the candidates for carnival queen, of the sound of the murga street bands (under the influence of the chirigotas of Cadiz) and of the dances of the carnival troupes. Soon, the city made these celebrations its own, with thousands of people gathering around the Parque Santa Catalina to watch gala performances and competitions and, above all, to enjoy the partying in the street, dressed up in carnival costumes. 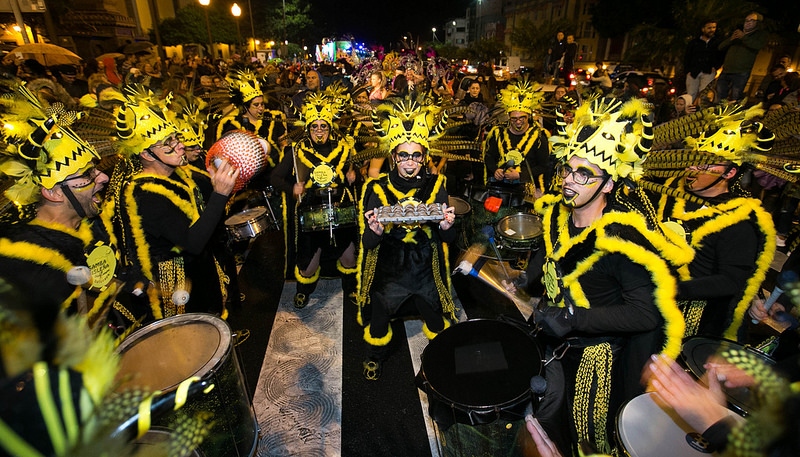 Carnival, the "festival of the flesh" didn't stop evolving at that point. In the 21st century, the programme has come to include spectacular events, it has moved with the times to celebrate the spontaneous encounters of those in fancy dress in the daytime... and to catch the attention of the numerous tourists who visit the city. Although the proclamation announcing the start of the celebrations takes place in Vegueta (in the Plaza de Santa Ana, with its layout of the Cathedral on one side and the City Hall buildings on the other, in anticipation of the architectural model that the Spanish would later take to America), the main galas and competitions are held in the Parque Santa Catalina, between the cruise ship dock and the Playa de Las Canteras, one of the most famous urban beaches in the world.

A spectacular stage is built there in Santa Catalina, where murgas, comparsas, children's groups, groups in carnival costume, models covered just in body paint, and even pets (interest in the Dog Carnival is growing) compete, and where Carnival chooses its Queen and its Drag Queen. 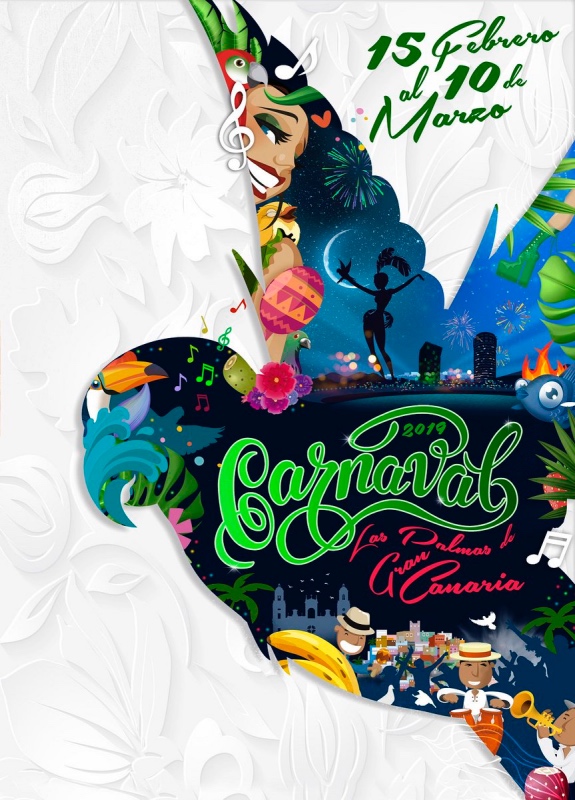 In each year's version, citizens choose a theme to base the celebrations around. In 2019 the Las Palmas de Gran Canaria Carnival is dedicated to "a Night in Rio": this is why the Santa Catalina stage will be turned into a tribute to the Carioca Carnival, and many of those taking parts are looking for suitable costumes which evoke the famous Brazilian fiesta.

What kind of experience is the Las Palmas de Gran Canaria Carnival? 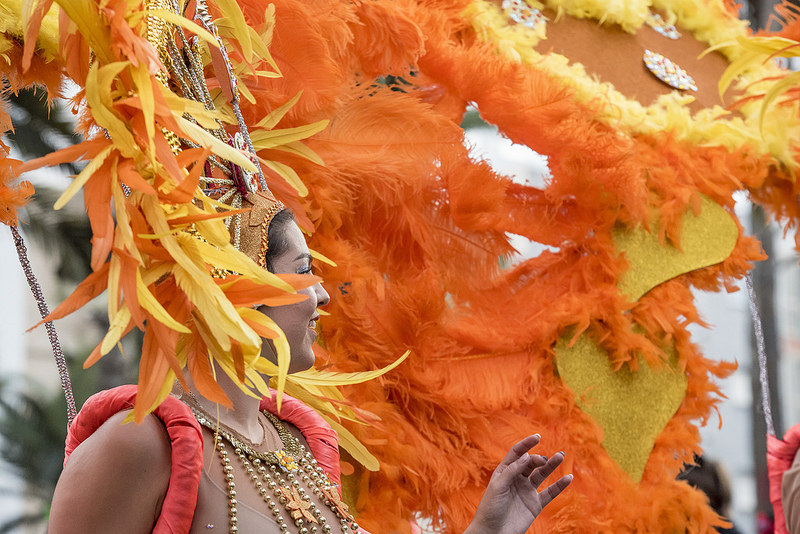 For visitors, the experience of the Gran Canaria Carnival is an easy one if they are just looking to enjoy the atmosphere and the fiesta in the streets. The programme covers events from February 15th to March 10th. On the first night, February 15th, Plaza de Santa Ana hosts the speech declaring the Carnival open: entry is free, and this historic area starts to live the moment, with musical groups parading the streets and a great ambience in a setting where bars and restaurants predominate... the beauty of this historic area is outstanding: it is here that the city started off, in 1478. It's a good imitation of A Night in Rio, on this side of the Atlantic. 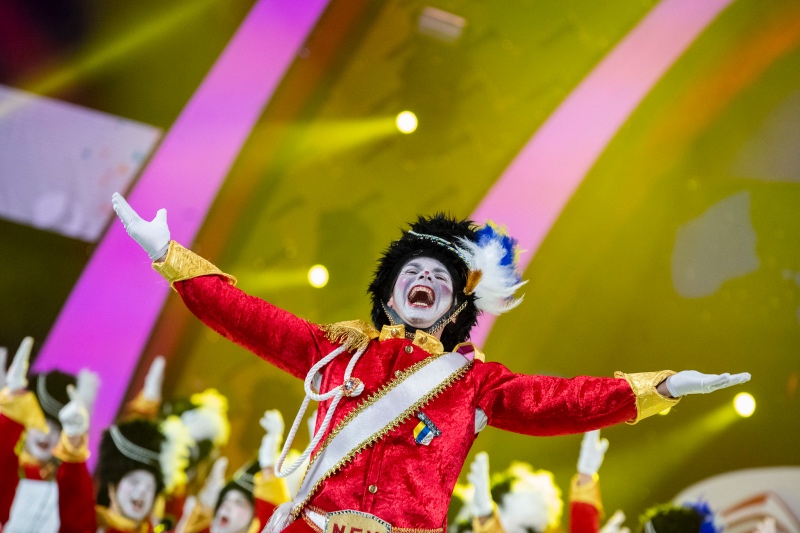 The first full week is devoted to group competitions ("murgas" - carnival street bands and "comparsas" - carnival stage shows) in Santa Catalina, which becomes the focus of attention of fans of these hotly disputed competitions; those taking part do so with great passion. Over the weekend of February 23rd and 24th, however, visitors also have other alternatives for their entertainment. 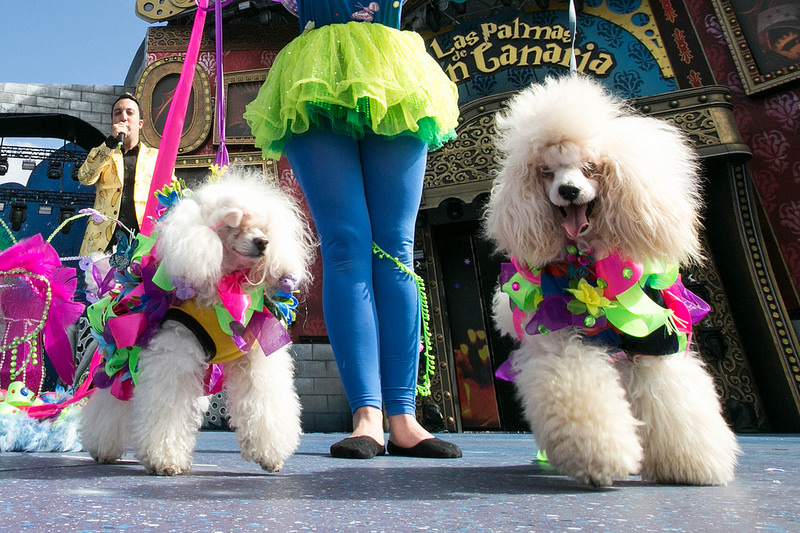 On Saturday 23rd, Vegueta takes over again with a massive Daytime Carnival, an attraction not to be missed during Carnival. And on Sunday 24th, these daytime festivities move to Santa Catalina, where the Dog Carnival is held at midday: an event where owners and pets compete in fancy dress. 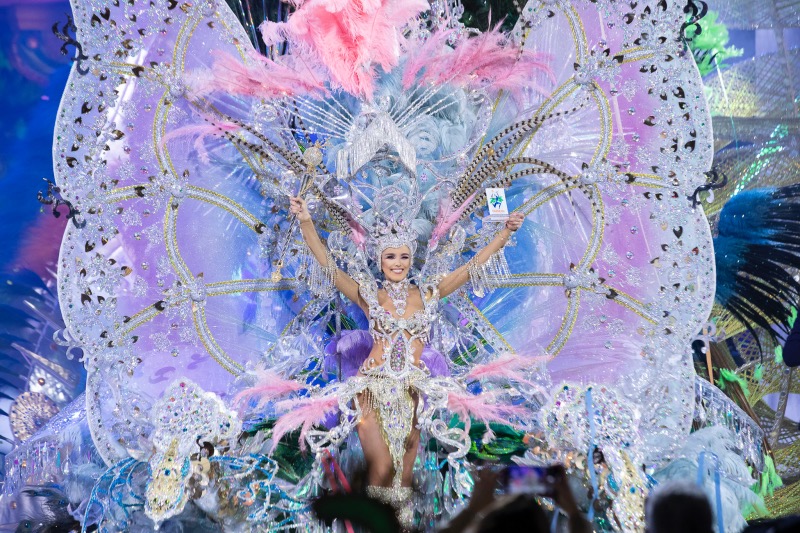 The following weekend (which lasts from Friday to Tuesday), to start March off, it's the turn of the great shows which are televised for the whole world from Santa Catalina. The Queen's Gala (on Friday 1st) and the final of Drag Queen Gala, on the night of Carnival Monday. 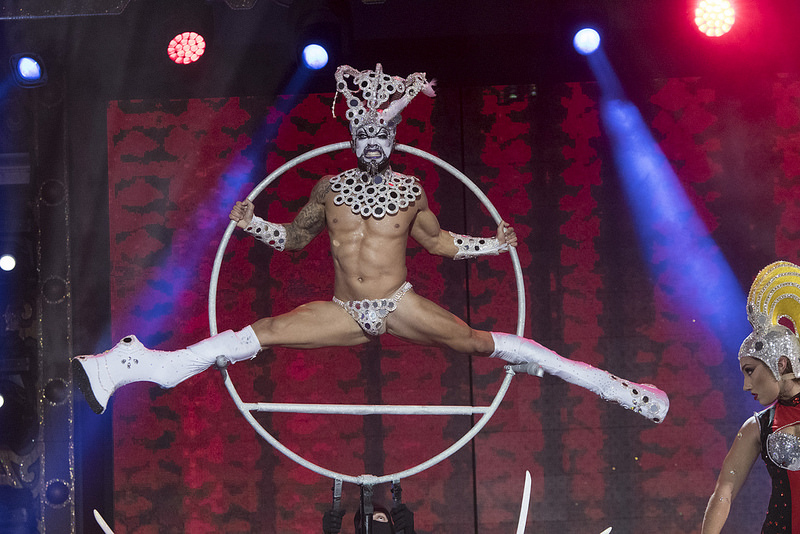 Beforehand, the candidates compete in a preselection programmed for Saturday 2nd, with no cameras allowed (so no secrets can be leaked) and which brings together a huge crowd. These events, however, are in great demand with local audiences and with tourists: entry is by ticket only, and tickets are put on sale a few days before in the park itself or on the Internet. You have to keep alert: these tickets sell out very swiftly.

Anyway, the festive atmosphere outside these competitions is very lively, with a Daytime Carnival in Santa Catalina on Sunday 3rd and Tuesday 5th. 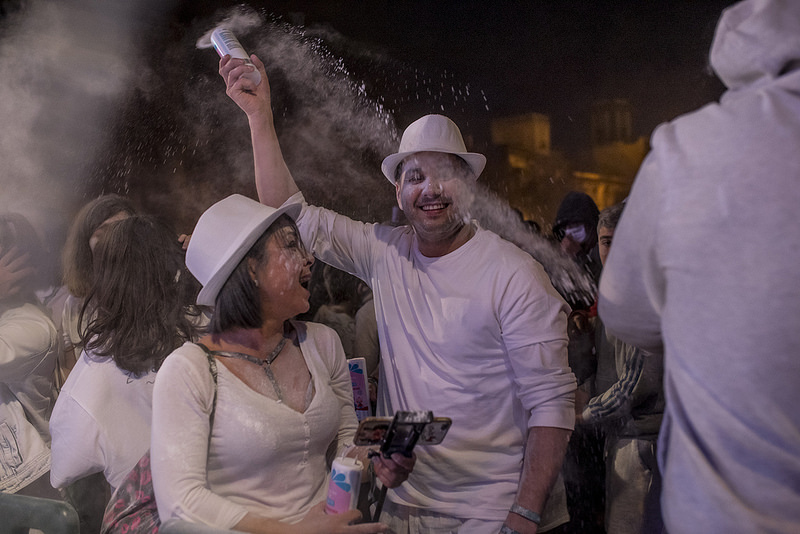 As well as this, the old city resumes the fiesta on Saturday 2nd, with a daytime celebration in Triana's Calle Mayor (a leading commercial area) and the Traditional Carnival on the night of Monday 4th (where everyone dresses in white and throws talcum powder at each other in recollection of the Indianos, emigrants who made their fortunes in America before returning home, in a party which the Casa de La Palma started to organise as a tribute to the great traditional celebration which takes place on that island every year). The Carnival Nights and their concerts in Santa Catalina around this time are another attraction. 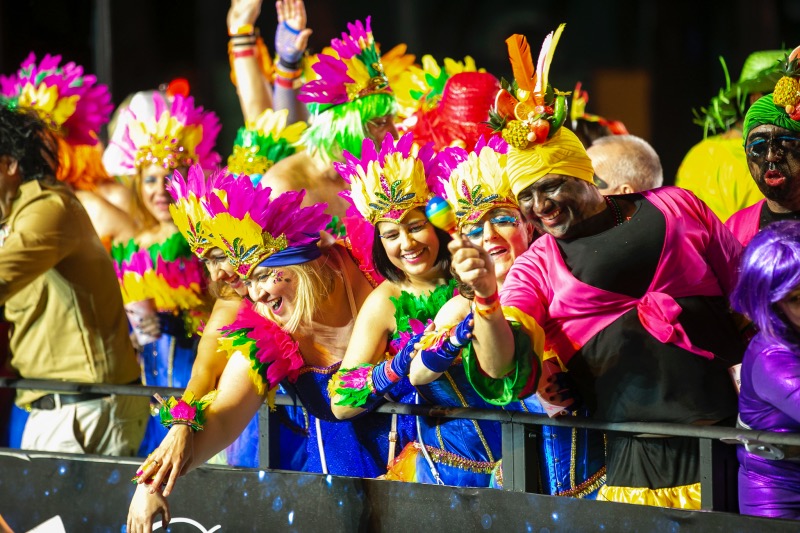 If visitors find themselves in the city in these last weeks, they will encounter a capital heading for the streets in fancy dress. In particular, in the big parades or cavalcades. The children's parade is programmed for Tuesday March 5th... and the Great Cavalcade is on Saturday March 9th. Floats (large vehicles also decorated for the occasion) mix in with the Carnival groups and the multitude that leaves La Isleta for the historic area over a long day which is almost the close of the Carnival. 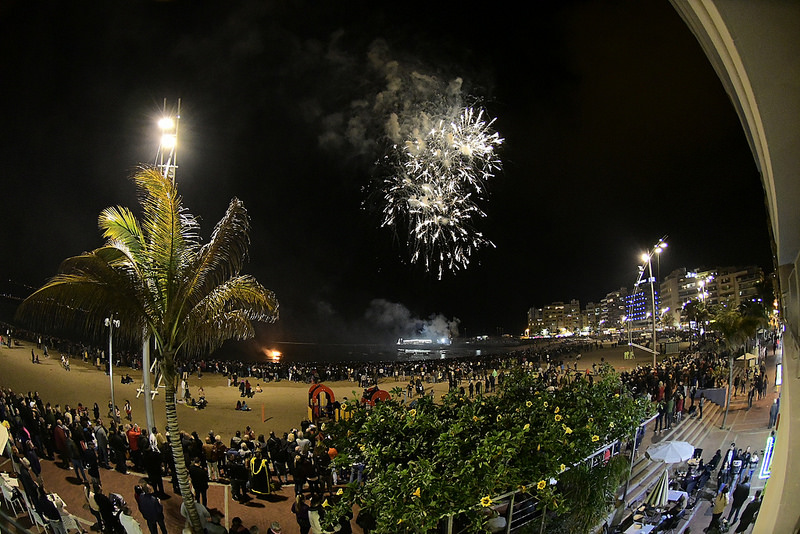 And the closing festivity will take place on Sunday 10th, with the popular “Sardine's Funeral”: a fish which stays in the custody of the Carnival Queen and Drag Queen in procession to the Playa de Las Canteras beach, where the figure of the fish is burned in the water. 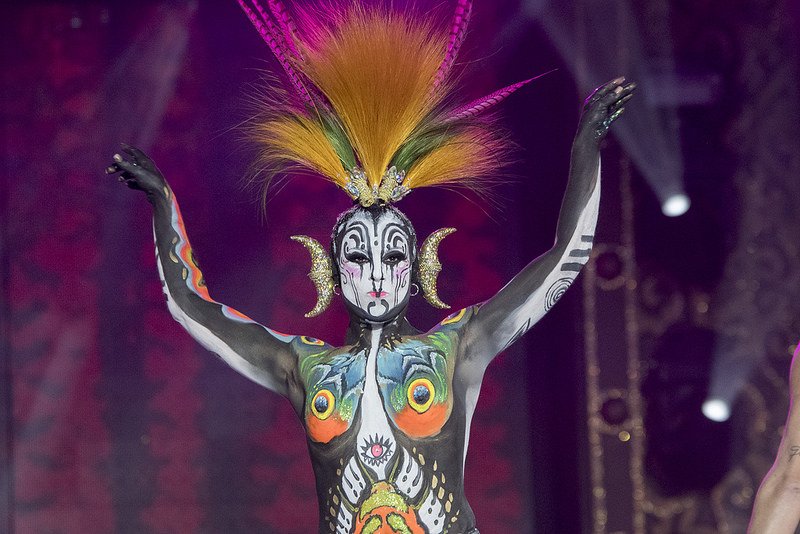 Before these parades, the body painting competition shouldn't be missed, in Santa Catalina on Friday March 8th: the skill demonstrated by the designers is stunning and the competition has increased in importance in the Carnivals of the last few years. 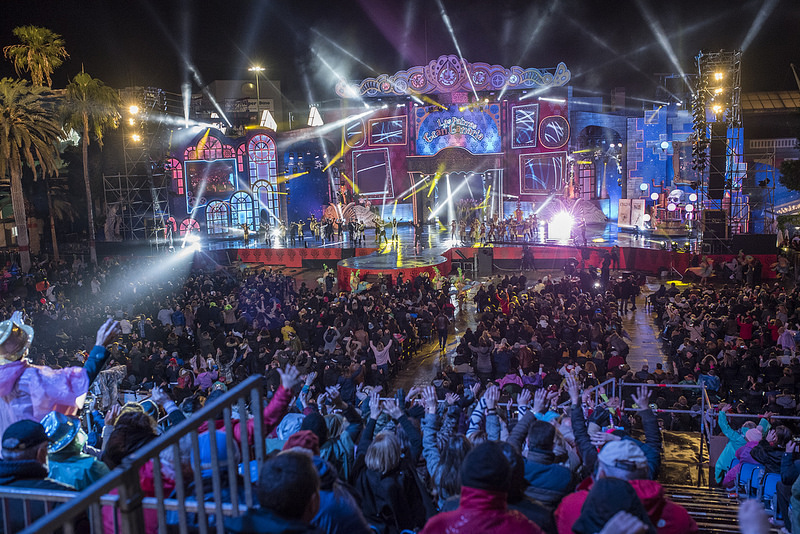 With a schedule like this, it's difficult not to get involved in the party spirit that invades Las Palmas de Gran Canaria for a whole month. Visitors will soon get caught up in its Carnival, with that particular stamp that a city accustomed to welcoming outsiders puts on it, in such a natural way... a city which is used to making its friendly merriment contagious.