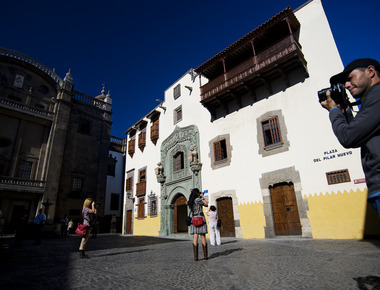 The most comfortable way in Las Palmas de Gran Canaria, is to take a guided trip on the Tourist Bus. Its timetable allows making visits on foot, while continuing the ride at ones desired rhythm.
Visiting museums, the Old Town, taking a walk on Las Canteras Beach, shopping, choosing between a wide selection of restaurants, and enjoying the terraces at our beautiful squares, pedestrian streets or by the seaside, all can be done on every season of the year. And for the afternoon or evening, do not hesitate to consult the many activities and shows our city has to offer for all types of public, either in their auditoriums and theatres or on the street.

Vegueta – Triana
The tour must include the main square, Santa Ana, the Cathedral, the Episcopal Palace and the Town Hall along with other noble buildings which preserve the historic taste and the architecture that was later exported to America by the conquerors. The Museum of Columbus, Canary Museum, Diocesan Museum of Sacred Art, San Martín Centre for Contemporary Culture or the Atlantic Centre of Modern Art (CAAM) will help you discover a rich culture that may be complemented with a visit to the Market of Vegueta and its various locals with traditional cuisine and the terraces of Mendizábal Street. Facing Vegueta, Triana, with its modernist buildings, its shops, terraces, singular buildings like the Literary Cabinet or the Pérez Galdós Theatre and the Museum-house dedicated to this writer, are strong reasons to enjoy this neighbourhood.

Ciudad Jardín – Alcaravaneras
In the middle of the harbour and the foundational areas, a ‘Garden City’ developed by British settlers attracted by the harbour works and, later, international trade and the supply of British steamers that had their obliged stop at the harbour dams and port sheds. The singular architecture remains in this neighbourhood that faces the sea and the Alcaravaneras Beach where the Royal Sailing Club and later the Marina were erected.

Port – Las Canteras
Tha Parque Santa Catalina, with its terraces, and the Elder Science Museum place us in the centre of this modern and active area of the city. Along with the shopping centres of Mesa y López Avenue and its numerous shops which are dotted throughout this area, Las Canteras Beach, full of locals and terraces by the beachfront promenade, is worth the visit. The three-kilometre long beach is used all year round thanks to the wonderful climate this city enjoys. It is flanked on the west by the Alfredo Kraus Auditorium and Congress Hall, and the natural and undeveloped area between La Puntilla and El Confital. A natural reef barrier shields the users of this beach that, besides, is fully accessible and fully equipped for a large urban beach. Las Canteras Beach possesses the environmental management certificate UNE-EN ISO 14001 that endorses its absolute respect for the environment, and the EU blue flag waves on its shore.
The port area lays out a wide range of activities, numerous vessels with flags from all around the world waving on its masts. Fishing ships, containers, bulk carriers, cruisers, naval forces, oil rigs and a long etcetera of vessels that keep the bay alive, along wit the North Atlantic marina and the Royal Sailing Club with a number of medals that turns it into one of the most important of the world.
Having said that Parque Santa Catalina might be the starting point for a one-day tour, this could also be a perfect ending place, with restaurants and terraced bars ideals for a chat.