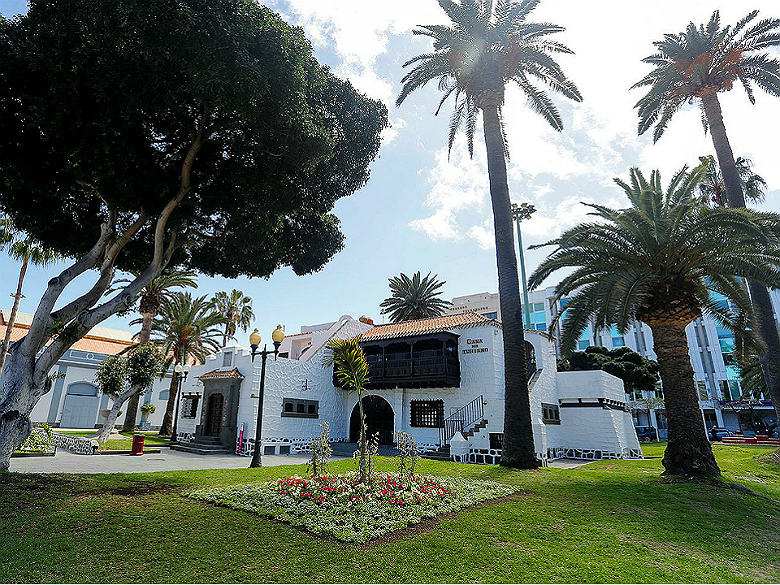 In 1935, Néstor Martín - Fernández de la Torre made the first drawing of the House of Tourism, the Island’s Produces Pavilion, at the main entrance of Santa Catalina Dock, the meeting point between Las Palmas de Gran Canaria and the Port of La Luz and Las Palmas, the place where tourists entered the city.

The artist conceived a space with a cellar, a shop, a restaurant and a porch, all in Canarian style. His drawings were included in the blueprints of the Project, made by his brother Miguel Martín-Fernández de la Torre, to assure the adaptability of the idea.

Néstor passed by in February 1938 and, after his demise, the building of the House of Tourism was carried out under the direction of Miguel Martín-Fernández de la Torre. Since its inauguration, the property has held the Provincial Board of Tourism, the Ministry Delegation of Information and Tourism, and the Provincial Direction of the Ministry of Public Works, Transports and Environment. Its spaces have also served as Tourist Information Point of the Tourist Board of Gran Canaria until 2002, and from 2007 it was used for archiving official documents.

The building is included in the city’s Catalogue of Architectural Heritage under the environmental catalogue index C, recognising the architectural value since it shows and serves as a reference to understand its time, its formal language, and its functional theme. Along with the Pueblo Canario, the Fataga House, and Santa Catalina Hotel, this building compound creates the so called Neo-canary Architecture in Las Palmas de Gran Canaria.