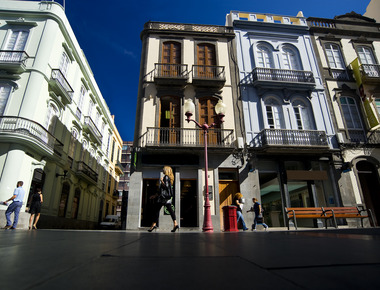 Triana was born after the growth of the city from Vegueta towards the flats of Triana. It is one of the busiest shopping areas of the city. In 1993, the borough was declared Historic Complex and Good of Cultural Interest. It is an ideal space for watching the modernist architecture of its buildings.
On this lively catwalk traditional cafes and ice cream stores share the space with famous international brands.
At numbers 76 (corner with Munguía St.), 78, 80, and 82 of Triana St., there is a set of buildings that stand out as Modernist Houses. These buildings are reconstructions from the first decade of the twentieth century, after the last realignment of Triana Street. It is a set that reflects a particular commercial bourgeois culture, with high architectural quality.